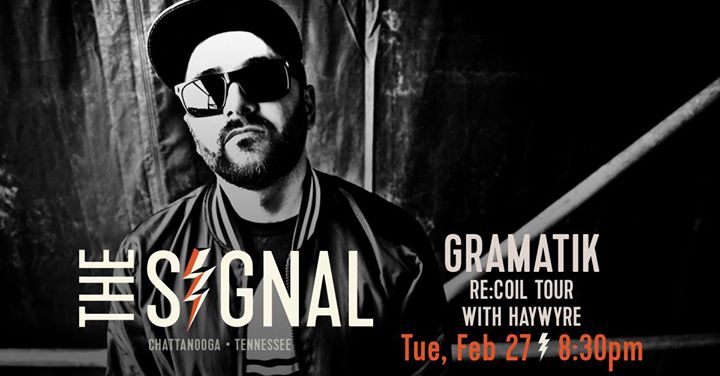 Gramatik with Haywyre and Balkan Bump at The Signal TICKETS -> http://ticketf.ly/2iiyEF6 On Sale Friday, December 8th at

Gramatik with Haywyre and Balkan Bump at The Signal

ABOUT GRAMATIK
Gramatik continues to prove himself as a relentless musical force, consistently putting out new releases and making people lose their marbles at his sold-out shows all over the world. Following his seminal 2016 album Epigram and subsequent remix EP’s he kept the streak going all year, while also gracing the stage at some of the biggest summer festivals like EDC Las Vegas, Metropop, Camp Bisco, Lollapalooza, Moonrise, Red Rocks and more. In January of 2017 there was a long-awaited reunion with another funk mastermind, GRiZ, on „As We Proceed”. The new GRiZMATiK track received excellent reviews from outlets like Dancing Astronaut, Run The Trap, EDM.com and plenty more, while also exceeding 1.2M plays on SoundCloud and reaching 2M on Spotify. Gramatik followed it up with a remix of Flume’s track „Wall Fuck” (1.22M plays on SC) which he produced with young Canadian artist, Ramzoid. The track was premiered on notorious Colorado-based blog Thissongissick, reached #1 on SoundCloud’s electronic chart and also performed well on Hype Machine. Then it was time to focus on the three singles leading up to his latest EP, „Re:Coil Part I”; on „Recovery” Gramatik teamed up with old buddy Eric Krasno and the bright, melodic jam caught the attention of Billboard who snagged it for an exclusive premiere. The next single, „Voyager Twins” was a collaboration with mysterious, Armada-affiliated act, fittingly called Galactic Marvl and on the last single from new EP he joined forces with new Lowtemp signee, Balkan Bump. The single’s title „Aymo” translates to „let’s go” in the majority of ex-Yugoslavian countries, including Slovenia, where Gramatik is from originally. Appropriately, the single dropped just before Gramatik headed out on a huge fall tour across the EU, visiting 26 cities along the way. During the tour, on October 20th, he treated his fans to the release of „Re:Coil Pt. I” EP and just like the year before when he was dropping „Epigram”, the release party for the heavily anticipated new release took place at the legendary Paris venue, Zenith. Another important milestone was awaiting on November 9th during his show in Zurich. As one of the pioneering artists embracing crypto-culture and the new blockchain-based technologies that work towards decentralization, he launched his own token, GRMTK, in collaboration with SingularDTV. This revolutionary new approach promises a convergence of network and data that will allow creators to bypass gatekeepers and intermediaries and seize control of their intellectual property. The full goal was reached within 24 hours and all together 2,3 million dollars in ETH were raised with hardly breaking a sweat, signaling that people are open to the new distribution models. Gramatik will be testing them in early 2018 when his follow-up „Re:Coil Part II” EP will be completed and ready to drop. The revolution will be tokenized!

Balkan Bump is the newest project from trumpet player, producer and ethnomusicologist Will Magid.

Balkan Bump launched to an unexpecting audience in late 2017 with his debut track “Aymo” alongside superstar collaborators Gramatik and Talib Kweli. Finding an affinity based in his own Balkan roots, Gramatik has championed the new project; debuting Balkan Bump’s first live performance at Gramatik’s anticipated NYE show at Terminal 5; taking Balkan Bump’s live show on the road for the Spring 2018 Re:Coil tour; and releasing Balkan Bump’s debut EP via his Lowtemp label imprint.